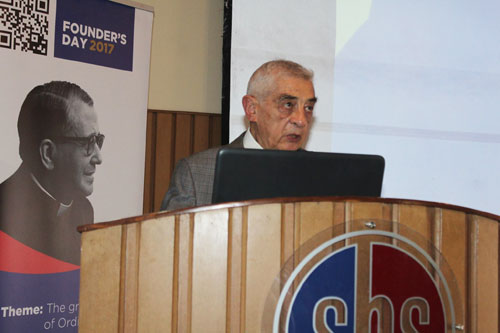 The old man was quite short, but he stood straight as a pole. Were it not for the wrinkles on his forehead and bags of age under his eyes, one would have thought him much younger. When he spoke, his youth seemed to creep back in, giving a kick to his accented words. Clearly, this was a topic dear to his heart and sweet to his memory.

The old man’s name was Silvano Borusso. He first came to Kenya in 1958. When he left his native Italy, fired up by the words of a Spanish priest, he was only 26 years old. He had nothing, not even the English language he would need to survive in the British colony. But he went on contribute to the foundation of Strathmore College, from which Strathmore University was later born.

Now here he was, nearly sixty years later, telling an auditorium full of Strathmore University students about that priest, St Josemaría Escrivá. One would have had to be in his shoes to see the matter in full perspective. The little seed planted in the souls of a band of young men had blossomed into a full-fledged institution not afraid to flex its muscles among its peers and, more than once, punch way above its weight.

As he spoke, the students looked on in barely-concealed awe. Perhaps they were enthralled by the idea that they could get to hear this story from one of those who started the institution they now called home. Or maybe Silvano Borusso’s charm was too much for them to resist. He has an uncanny ability to hold even the largest audiences as if by a hook.

Strathmore University was celebrating Founders Day 2017. It is a relatively young tradition, having seen only one previous installment, in 2016. But the University intends to celebrate it every year. The aim is to make the University community more familiar with those who started the institution and especially with the man who inspired it all.

Founder’s Day is actually a misnomer; the event lasted a full week. Silvano Borusso’s speech was made on the afternoon of Friday, 6th October. The event started with a high tea for a section of the support staff the Monday before, followed by days of activities for students. This included a photo competition among the students. The winning student took home a new smartphone.

That Wednesday, another session was mounted for the students with Prof David Sperling, who came to Kenya at the same time as Silvano Borusso, and was directly in charge of starting Strathmore. He talked of the small beginnings, and the challenges they had to overcome to start a multiracial school in a country that had never seen an institution of that kind.

Towards the end, with a wistful look in his eyes and a slight tremor to his voice, Prof Sperling returned to the inspiration he had received from St Josemaria. “I have been fortunate enough to be on the journey inspired by him from the beginning,” he said. “Thanks be to God I still have the good health and ability to stand and speak coherently to a group of undergraduate students of Strathmore.”

A key to understanding his gratitude was revealed two days later by Borusso in his speech to the students. Speaking of St Josemaria, he said, “We were needed here, so he sent us here… when he sent people anywhere in the world, he always made the same recommendation: ‘Do not encyst yourselves… do not become an isolated group… spread around.’”

That has been the secret of Strathmore all along. Injected right into the fabric of society, integrated with all that makes for a common identity, the institution has served with society without any pretence since the beginning. The trail it has blazed is one of progress and service. Now it looks to a future of doing even more of that and better, a future of ever-greater excellence in making people the best they can be.

If the intention is fulfilled, another Founder’s Day will be held next year and another one the year after. Joyfully, Strathmore University will also look back at the roots that feed it with the nutritious sap of tradition and wisdom, of a deep appreciation for the dignity of the human person, and of the love of a saint who deeply believed in the equality of all mankind.