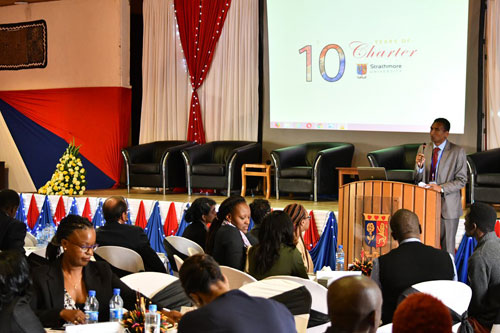 It is not often that the Vice-Chancellor of Strathmore University gets a chance to hold court with all of his staff members. As a result, despite the fact that he operates an open-door policy, there’s a tendency for some distance to be kept by staff.

It is not a steely distance, like that between an imperious lord and his hapless subjects, but rather a warm distance, the kind born of deference for authority. So, whenever good old Prof John Odhiambo gets the chance, he goes great lengths to shorten that distance, as if to reset it for a new beginning before the next chance.

The last time he got such a chance was on 4th May 2018, when he stood to speak to an auditorium full of lecturers and administrative staff of the university. The occasion was a staff lunch mounted to celebrate the 10th anniversary of the promulgation of Strathmore University’s charter. The lunch came at the end of a week of events to celebrate the occasion. It was immediately preceded by a solemn Mass in the University Chapel.

Striding across the stage, Prof Odhiambo let loose his humorous side, regaling the staff members with countless jokes gleaned off his long career in academia and the 15 years he had served as Vice-Chancellor. By the time he finished, having even educated all gathered on the correct intonation of the second syllable of his second name, the auditorium was full of aching ribs and grinning teeth, and the said distance had been melted into nothingness.

Of course, in between the jokes, he recounted the journey the university had taken, from the moment it started operating as a university in 2002, with an interim letter, to the time, in 2008, when President Mwai Kibaki and Prime Minister Raila Odinga arrived at the university bearing the charter. At the time, he said, the University had only three schools. It nowhere near being a full-fledged university.

In the ten years since, seven other schools have been started, and the number of academic programmes offered has shot up. The student population has gone from around 1000 to over 6000. And the number of staff members has risen to over 600; there are now so many that, had all of them shown up for the lunch, the space in the auditorium would have been insufficient. And, as all this has happened, more buildings have sprung up on campus to house the extra souls.

Prof Odhiambo stressed how, alongside the growth, care has been taken to ensure that the spirit and reputation of Strathmore does not wane. From the moot courts where Strathmore University law students have developed a deadly knack for flooring opponents to the random sight of someone picking up a stray piece of paper and dropping it into the nearest dustbin, the spirit lives on in the lives of all who come in contact with the university.

However, despite the fact that he had just started out on a fourth term, he acknowledged he was long due for a rest. For him, therefore, it was his closing words that were the most important. For he closed by inviting Dr Vincent Ogutu to address the gathered staff members. Five days before, it had been disclosed to the whole university that Dr Ogutu, who had been serving as the Deputy Vice Chancellor for Planning and Development, had been designated to succeed Prof Odhiambo as Vice Chancellor at the end of the fourth term.

And so the old short professor bounded down the stairs, a wide grin plastered on his face, leaving the stage to the younger taller man whose job it had just become to grow into his shoes and eventually take them over.