Once a month, on a Friday evening, a group of young men descends upon Mbagathi Study Centre, a bright-walled building that sits squat next to Strathmore University in Nairobi’s Madaraka Estate. Most of them are recent university graduates, navigating the bottom rungs of a nascent career. A few are married. Most are not, though many admit to be in that amorphous stage called “searching.”

They sit on the multi-coloured cushions of the seats along the red walls of sitting room, which is decorated with, among other things, a stylised world map cut out of wood and coated in white paint. As they congregate, light banter eases into an informal conversation with an invited guest, almost always someone with extensive professional experience in one field or another. The topics of discussion range from getting work done, to planning a career, balancing work and life, courtship and marriage.

Questions fly around. Laughter frequently lights up faces and leaks out onto the darkening parking lot. Every now and then, someone darts out to see the priest, who sits in the room next door. At some point, aperitif is wheeled in on a trolley, and jaws get to work. For some, this will be dinner, less because of lack of money than because the drudgery of preparing and then cleaning after a meal. 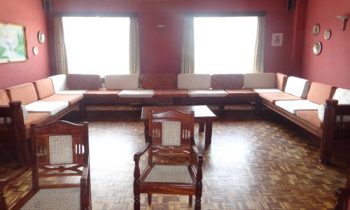 This is the Nexus, and it is Mbagathi Study Centre’s response to the need for community and formation among young professional men. It might not be immediately obvious, but this is a demographic that is often left out of cultural and economic discourse. It is not difficult to explain this, for the place of a young professional is rarely at the forefront of society’s dominant concerns.

On the one hand, they have left the spotlight and attention enjoyed by children. On the other, they have not yet become prominent enough in their work or social contribution to be noticed. Moreover, as they are employed, the discontent and idleness that often drives their age mates to the streets is not a reality for them. Nobody has to make an effort to ignore young professionals. They seem to be uniquely cut out for obscurity.

Yet this does not change the fact that the early parts of a career remain a crucial period in any young man’s life. The loneliness of an unaccompanied journey can be depressing, and possibly destructive to one’s future. The Nexus is an attempt to remedy this. It provides the young professionals who participate in it with a forum to engage and share experiences with one another, as well as to glean insights from the experiences of older professionals.

It is a place where the young men can be easy with one another, without worrying about appearing either infantile or too serious. Here, the vagaries of a life on the edges of society are not shuffled under the carpet. Looked at in this sense, Mbagathi starts to take the appearance of a second home.

John Mutisya, the director of the centre, speaks of the enthusiasm with the programme has received. Though they are initially guarded, as would be expected, the young men enjoy it so much, it is often a question what time they will leave once the sessions end. He is thinking of adding a movie to the timetable to give content to this latent desire to extend the time spent at centre.

One of the regular participants is Gabriel Dinda. A Graduate Assistant at Strathmore University and also founder of Writers Guild Kenya, a writers’ club, he has been part of initiative since the very first session. And he has nothing but good words for The Nexus. He says he finds it very responsive to the needs of the young men it is designed for.

On the one hand, it is not overbearing, in the manner activities for young people can sometimes feel for people for whom parental authority is more a matter of honour than obligation. And on the other hand, Gabriel insists, it maintains basic moral standards, so that things have very few chances of spiralling out of control as they often do where young men are involved. “If that is not interesting, then we need to redefine interesting,” he says.

“It makes sure we are not left out and that we do not leave each other behind. We are in this journey together, and getting to know those who are along for the ride is a very satisfying experience.”